8 reasons why you should have a navy blue suit

After my last text I have been showered with questions about the navy blue suit, which is why I have decided to collect and answer them all. That’s how this text originated, where I explain why it is worth having...

After my last text I have been showered with questions about the navy blue suit, which is why I have decided to collect and answer them all. That’s how this text originated, where I explain why it is worth having a navy blue suit in your wardrobe and why it’s nearly always buying such a garment.

Universal, timeless fashion should be a fundamental part of our wardrobe. Men’s fashion classics are always fashionable. A white shirt, gray T-shirt, navy blue suit, dark jeans, leather jacket, or brown brogues and sneakers. These and many more other fashion items do not follow fleeting trends. Silhouette-fitting cuts and trends do change, but one can say without hesitation that the classics, once popularized, always remain fashionable. An invaluable advantage of such garments is that they match other pieces very easily. They provide a foundation on which you build effective combinations. And that’s how it works with a navy blue suit.

A navy blue suit is good not only for weddings, funerals, office work and important business negotiations, but also for a date or afternoon leisure time with friends.
A navy blue suit is a true all-rounder. I have tested it many times in daily life, such as when I had to meet a client on business in the morning and then had no time to change at home before a date with my girlfriend. Whenever I wore a navy blue suit, tiny modifications sufficed to feel equally comfortable in the afternoon. I could take off my tie, change the pocket handkerchief, put on a turtleneck sweater or a cardigan and change my image. Today, I am absolutely sure that if you have no idea what to wear for an important examination, a job interview, your friend’s wedding or negotiations with a client, the safest solution will always be a navy blue suit and a white shirt. I give you 100 per cent guarantee that you will not make a faux pas.

Note: this may be a life-time investment ;). There are only three colors of suits that are always in fashion: black, steel gray, and navy blue. Naturally, cuts do change, but you are bound to win if you invest in the most classic model: no pin line or stripes, no extravagance, contrast, additional stitching or full dress lapels. The most timeless suit is made of wool with a delicate gloss or no gloss at all. It is worth examining and investing in a more expensive fabric. We should steer clear of wool mix fabrics with synthetics, such as polyester, polyamide and others. 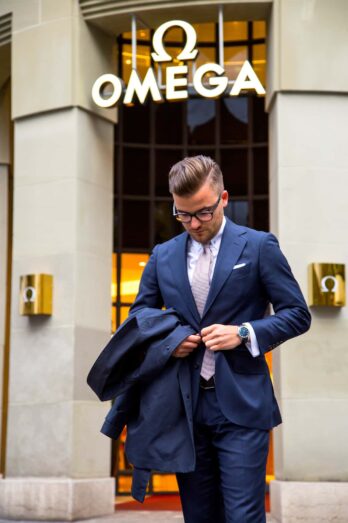 Creates a sense of trust

Psychologists proved long ago that there is something about the psychology of colors. When we see certain colors, our brain produces chemical reactions which may generate specific emotions. Green usually calms us down, red energizes (even the libido), and navy blue… Well, this is the color of trust, success, and intelligence. It is not for nothing that such suits are worn by politicians, not only during their political campaigns. Just type Andrzej Duda in your browser and you’ll see that our President usually chooses suits in a shade of navy. Rarely does he change it for steel gray. But, of course, he was not the first (nor is he a model of style and outfits, either). Already in the 1960s, John F. Kennedy was faithful to this color. Tony Blair and many other politicians followed the same path. Just consider this: what would you think about a politician who fancied pastel-color suits? Beige or light blue make a person more accessible and delicate, and these are not the features that politicians are identified with. And what are the implications of black? Obviously, this is also a color of power, but it is not universal because it carries a more conservative, darker message than navy blue. In addition, it is a mourning and gala color.

A navy blue suit is as good as becoming almost invisible. I do realize this may sound weird, but there’s an explanation. Two years ago, an interesting experiment was conducted by a journalist, the host of the morning program “Today”, broadcast on Channel Nine. Karl Stefanovic revealed that he had worn the same suit for a year and nobody noticed. During that time, there were many negative comments about the female TV presenter’s dresses. “I am evaluated for the quality of the interviews I conduct, my sense of humor, the way I do my work […]. Women are often viewed by what they wear or their hairstyle”, Stefanovic noted. But in my opinion, he was wrong! Had he been wearing only one beige, gray, red, checked or striped suit all year round, everyone would have noticed. He would have been called an eccentric, or at best – a lover of one color. It is not by chance that TV presenters wear a navy blue suit in front of the camera. They look universal (which is not the same as boring), they create a sense of trust, and do not stand out. They look very well in the light of the camera. In their profession, professionalism comes first, and again, this is enhanced by our navy blue “hero”.

With one navy blue suit and some great ideas you can create an infinite number of combinations to suit every occasion. You plan a formal go-out: add a matching light blue shirt and a dark plain tie. Should you wish to create the opposite effect and look more casual, wear a Vichy-checked and knit shirt, and match it all with e.g. suede monk shoes. Do you prefer to wear smart casual? Here you will ideally use a coordinated match, which means a combination of trousers from another suit. Remember: the safest option will be gray of fabric grammage similar to that of the jacket. A navy blue suit is an ideal foundation to build on for those that like experimenting. If you have any rarely used colorful ties, interesting pocket handkerchiefs, this is the time to use them. Navy blue does not attract attention. In contrast – it exposes all accessories, including extravagant ones such as colorful socks or eye-catching shoes. This color feels at home with any shade, and is the only color that matches everything.

Matches all types of complexion

If you do not know what color suits you best, buy a navy blue suit. You will never be mistaken. Do you want proof? Here you are, almost at random. Both Barack Obama and Donald Trump look best when wearing a navy blue or dark blue jacket. And these are two men of completely opposite appearance. Navy blue is good for men with a fair complexion – which cannot be said about black, beige or light blue. These colors not only highlight a pale face but also gray temples. What is interesting is that, in contrast, black highlights all one’s defects, including one’s figure. The sharp contrast with the exposed body parts highlights all the imperfections, especially on the face, and makes us look pale.

Navy blue also offers unique advantages, since it is able to make us look far from sad, tired and professionally boring. In contrast, it lends us vitality and energy, rejuvenating us. In the past, businessmen were advised to wear steel gray suits. Today this color is said to be on its way out from wardrobes in favor of a more modern, less banal and more sublime navy blue. Only very young men, school graduates, should avoid wearing a navy blue suit at business meetings or job interviews, because they may end up looking like school boys. But this applies to a minority of us, those with a “baby face”. The “Early Daniel Radcliffe”, who unfortunately often chose dark blue jackets for the premiere of his Harry Potter films, is an example of this.

Have you ever thought why Barack Obama and Mark Zuckerberg almost always wear pretty much the same clothes? The former loves navy blue suits while the latter prefers comfortable T-shirts. “You’ll see I wear only gray or blue suits. I am trying to pare down decisions. I don’t want to make decisions about what I’m eating or wearing. Because I have too many other decisions to make” – the US President has said. The Facebook founder explains the monotony of his dress almost identically. One day he took a picture of his wardrobe, full of identical gray T-shirts, asking fans what he should wear for the first day after paternal leave. Laziness? No ideas? Nothing of the sort. Zuckerberg explained that, for him, the gray T-shirt minimizes the number of decisions he has to make. Such an attitude is apparently very practical and makes a lot of sense, seeing that both men boast great success.

So? Are you still having second thoughts about purchasing something that can do nothing but benefit you? The only thing to do is to choose the proper model. One of the best available suits in terms of price and quality balance is the one shown in the photos above (read more here).(. Another advantage is that after entering your code: aebgrP437JR when placing your order, the price will go down by as much as PLN 1,000! Hurry up, as this model will only go up in price. After 21.11 it will already cost PLN 1,749, and after the pre-order period its price will reach the regular price of PLN 2,499. This navy blue suit is to be found here. Happy shopping!

EMAIL Send to a friend via e mail
Video

All entries in the category